Back to our work

The Bus Industry of Greater Copenhagen had become a place you did not want to work and had a reputation for delivering unattractive services to its passengers. We changed how the industry looked at itself, helped build a positive image in the public and create internal pride. Only 13 % of the bus drivers though the industry had a good image before the project. After four years, this had increased to 46 %. 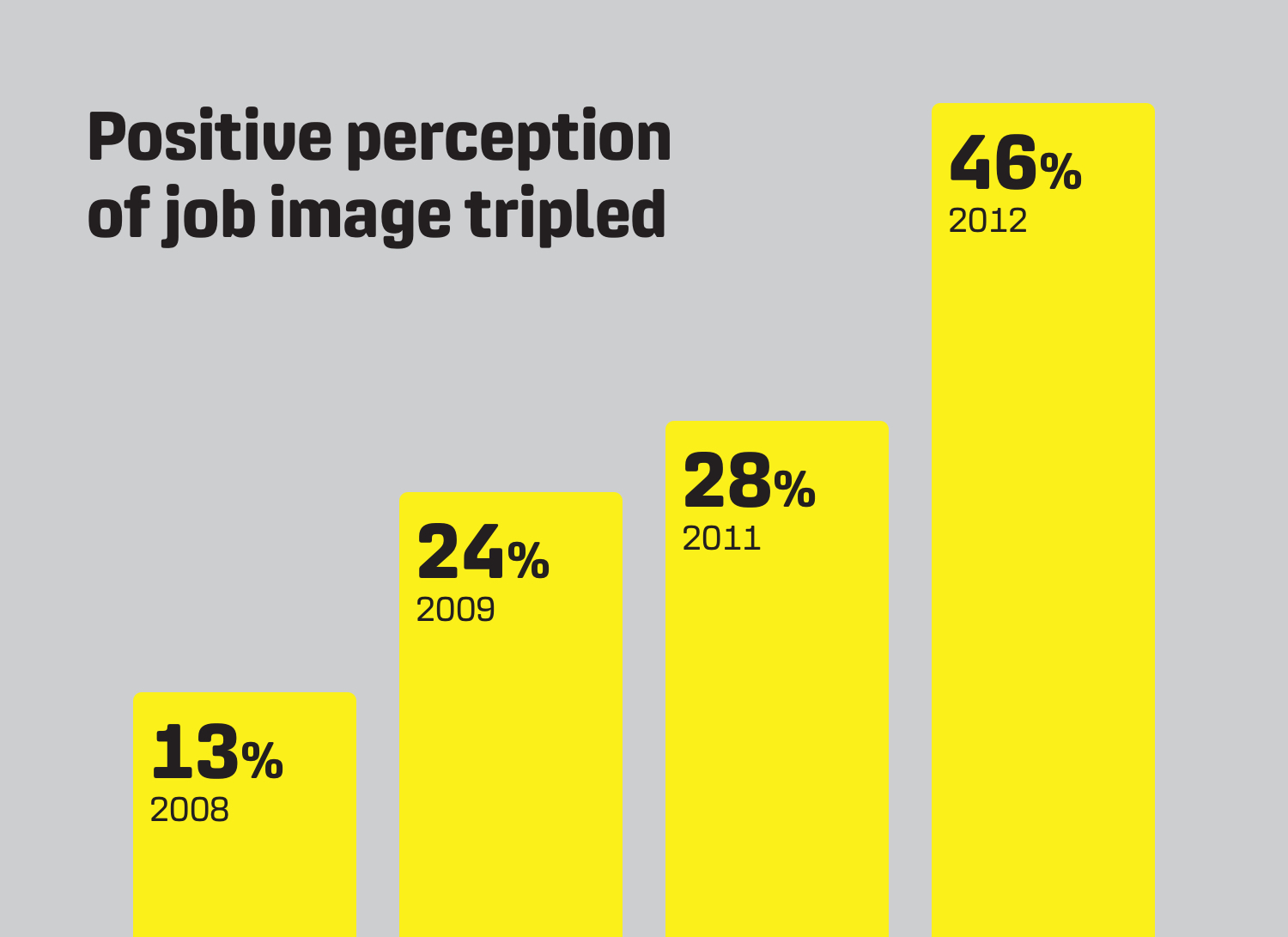 We wanted to create a new public reputation that would attract employees and get more people to choose the bus. But we knew that no media campaign could do the job alone.

Watch Movia and Stagis explain the strategy to transform an industry

We had to change the staff and management focus from tangible measures, such as delays, towards more intangible measures, such as job satisfaction and positive customer experiences. We had to change the culture and internal perception of the job before we could change the public's image of bus drivers. Therefore, we gathered the private and public part of Copenhagen's bus industry with hundreds of busses and 4,000 bus drivers.

Bus drivers with character - that's a pioneer project. I think this is the beginning of many good stories about taking the bus. This project will be instrumental in achieving that. Lars Barfoed
Danish Minister of Transportation, 2008

We designed, executed, and delivered a leadership and staff training program named Movia Academy with the objective of changing how the bus industry saw their role – as individuals and as part of society.

The program promoted "Drivers with character"; the employees who create good experiences for colleagues and customers. The academy consisted of class instruction, outdoor team exercises, and personal mentoring. The five-day training program helped the executives, managers and front end staff to see which behavior was creating positive results.

Movia Academy had a direct positive effect on sickness absence, staff retention, recruitment, and customer satisfaction. The cultural change led to improved job satisfaction which increased from 71 % to 90 %. 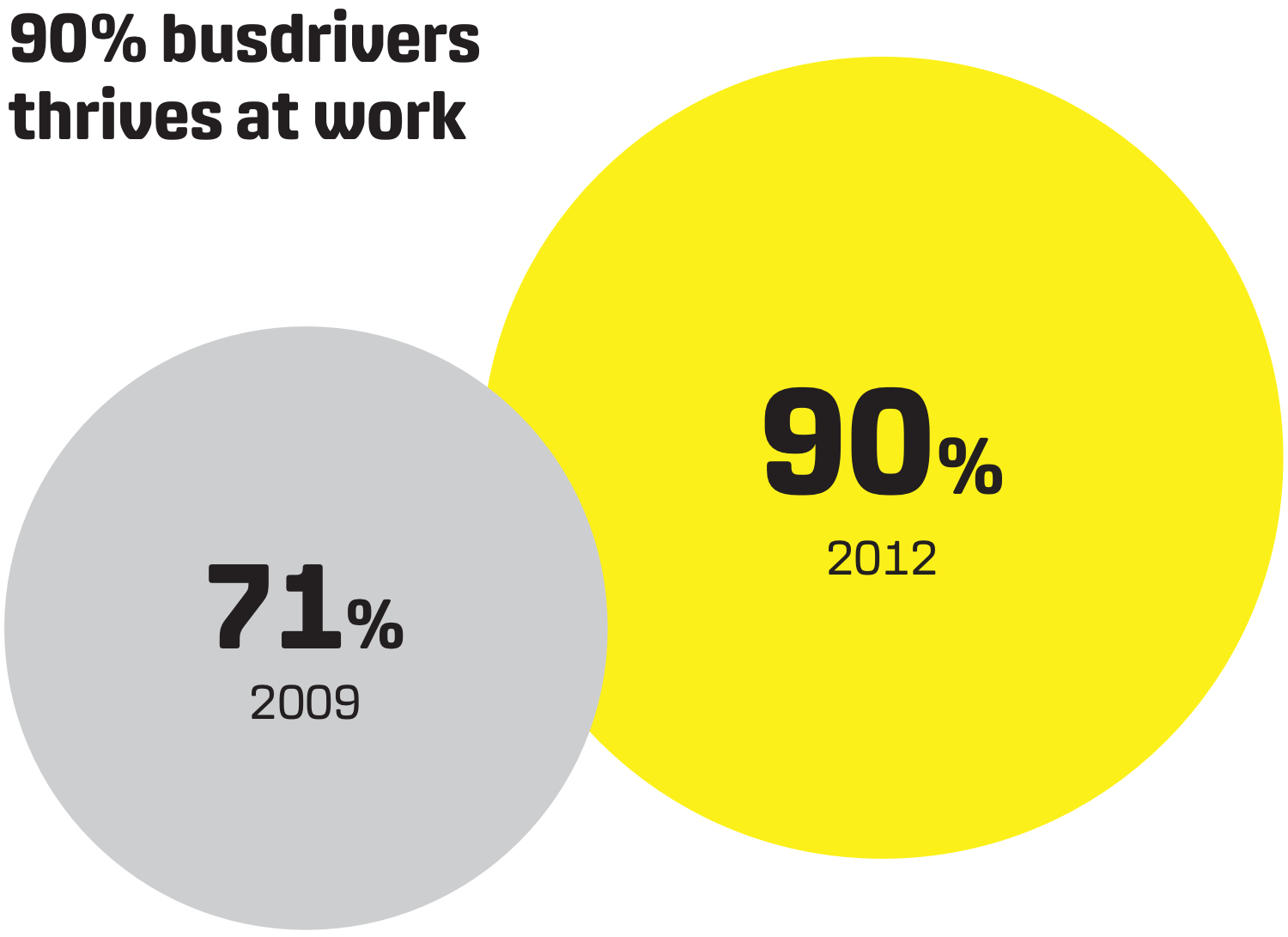 We can see our sickness absence is now about 3 percent. The industry has an average of 8 percent. We think that our lower fuel consumption is caused by employee behaviour. They appear looking happier. This means millions in savings for our company. Paul Lacoppidan
CEO, Nobina Denmark

By naming and visually showing the personalities that create extraordinary experiences on the bus ride, we showed the customers the true face of the bus drivers and helped create internal pride. We created the visual identity, name, colors, typography, and visual grid that would carry the messaging – internally and externally, online and in campaigns.

Thousands of passengers send texts with praise for bus drivers

The campaign "Bus Driver with Character" encouraged passengers to send a text with praise for their driver, when they had a positive experience on the bus. By using paid commercial media creatively inside the buses we got 8926 text messages. This contributed to a change of attitudes towards the bus drivers. 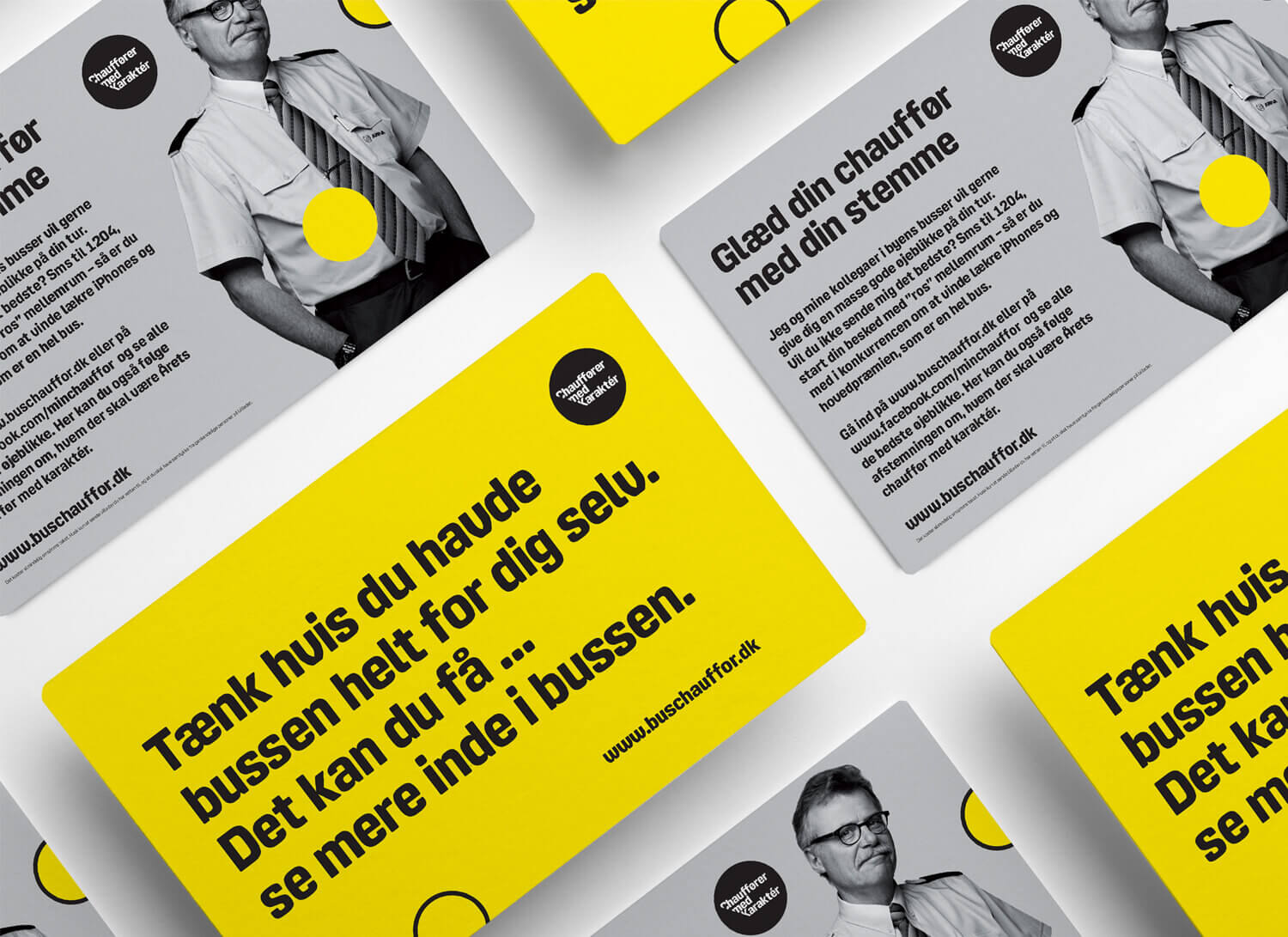 Game engages passengers to vote for bus driver of the year

We created a playful campaign website that collected texts, that passengers had sent with praise for their bus driver. By presenting two texts at the time and asking the user to vote for the best one, we made a simple game out of diving into the massive amount of positive moments from bus rides. By voting, passengers nominated the drivers who deserved to become "bus driver of the year".

The website also offered knowledge about the bus driver job, possibilities for finding a job, the bus drivers' own online video broadcast and news about events. We delivered the concept, user experience development (UX), grahpic design, content and programming. We generated website traffic by campaigning in the busses, the press and social media. 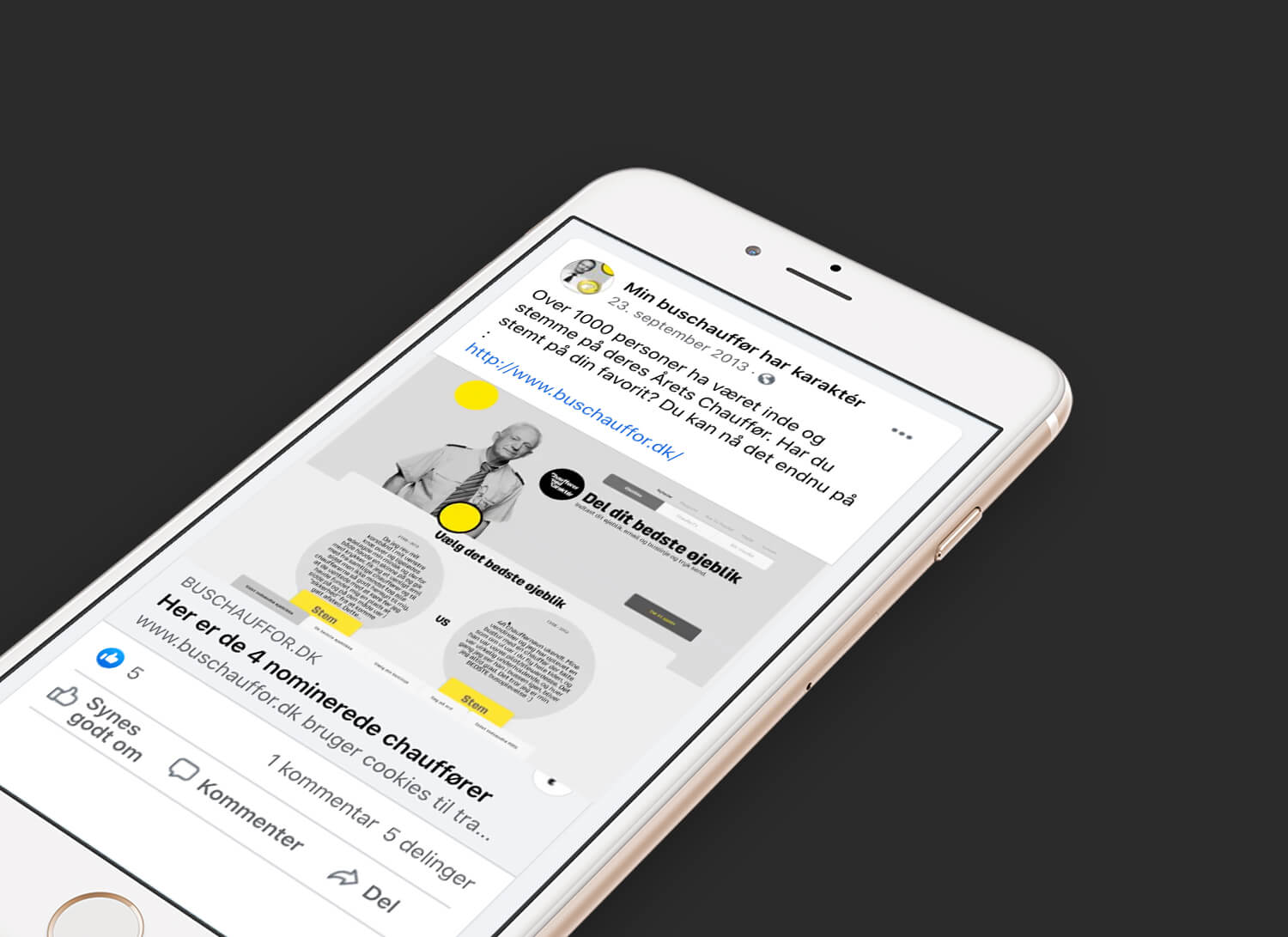 To increase internal pride and external image of the bus drivers, we created and executed the ”Bus driver of the year” award show. Thousands of text messages from passengers were used to find the bus driver that got the most positive feedback from customers. The award event was public in the middle of Copenhagen, where both bus drivers and passengers stopped by. 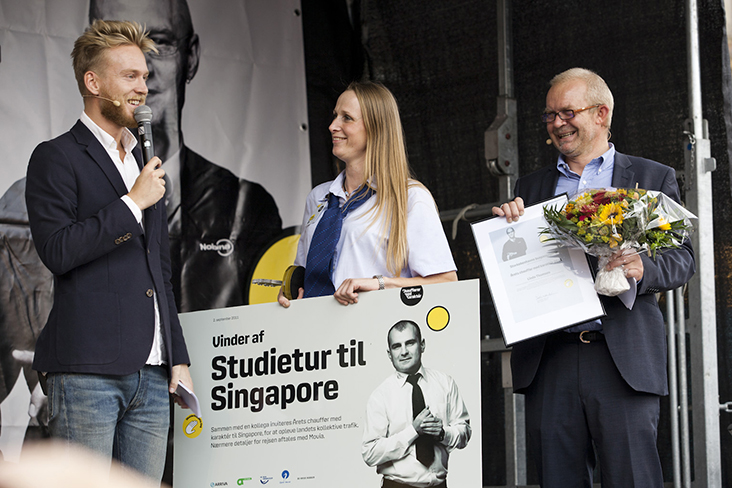 Linda Thomsen was the happy winner of the ”Bus driver of the year” award. Announced by tv host Huxi Bach she won a trip to Singapore along with the honour.

We succeeded in getting hundreds of positive stories about the bus drivers in the press. Creating public events is an effective way to get attention and communicate your message. We made sure, all initiatives in the project and events were covered by the press.

We invited Denmark’s best freestyle rapper Pede B and five bus drivers to record their own rap as a response to MC Einar’s rap “Jul, det cool” (meaning “Christmas, it’s cool”) where he describes bus drivers as being angry. The five bus drivers performed their rap live on “Aftenshowet” on national danish tv.

In collaboration with Danish photographer Henrik Saxgren we created a photographic book "Bus from Baghdad" about the bus drivers who represent more than 30 nationalities in Copenhagen.

We managed a photographic exhibition to be shown in public squares around Eastern Denmark. All of the events gave the bus drivers a public face and helped us tell new stories about the industry and the job. 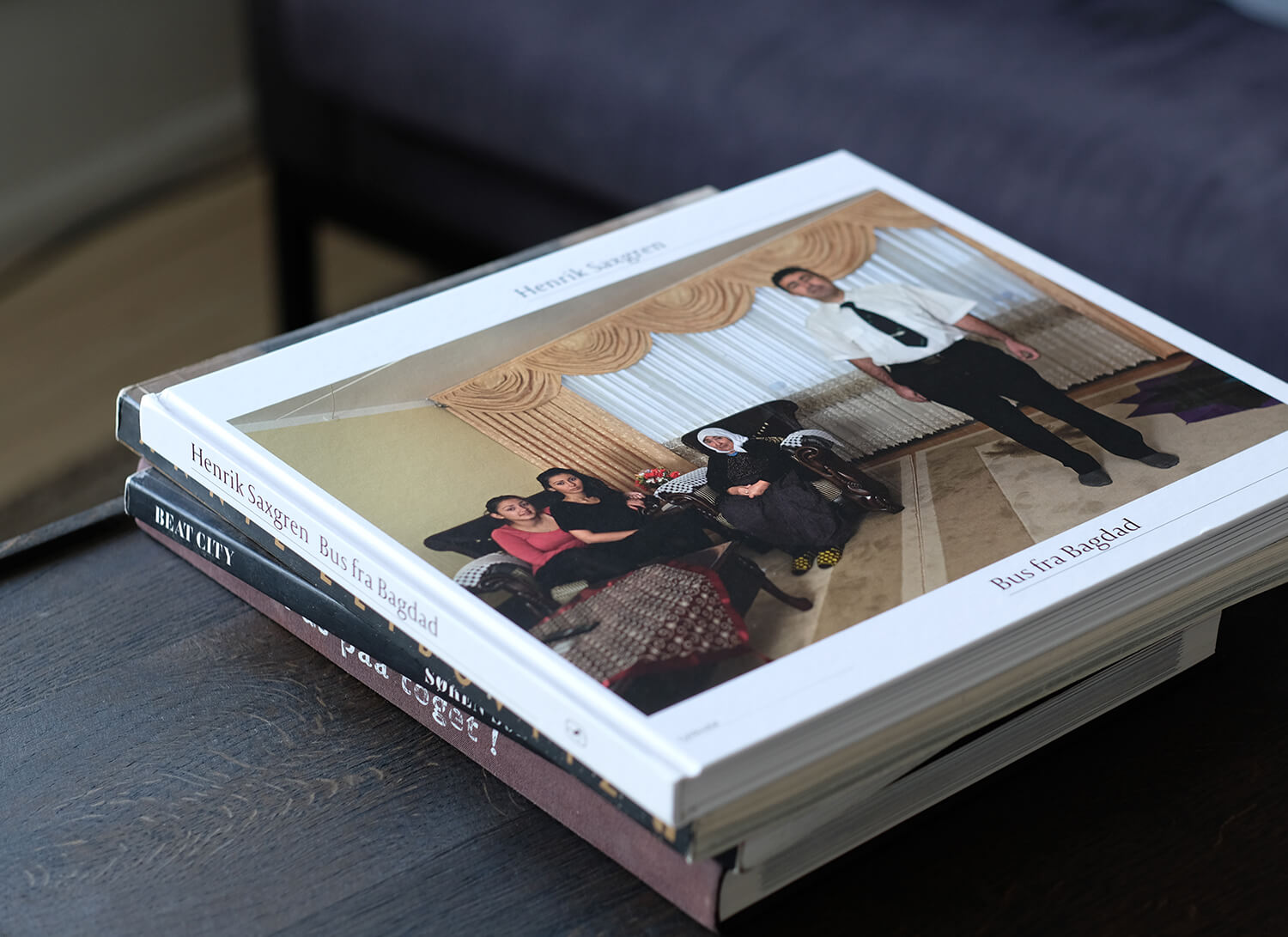 PR work succeed with 546 positive stories in the press

We ensured media coverage of every part of the project, by working proactively with PR. We had stories in a wide range of Danish media such a Politiken, Berlingske, DR, Jyllandsposten Se&Hør and local newspapers. In 2008 the majority of the media coverage was negative and only 28 % of the stories were positive. We transformed the industry's media presence resulting in 82 % positive stories in 2011. 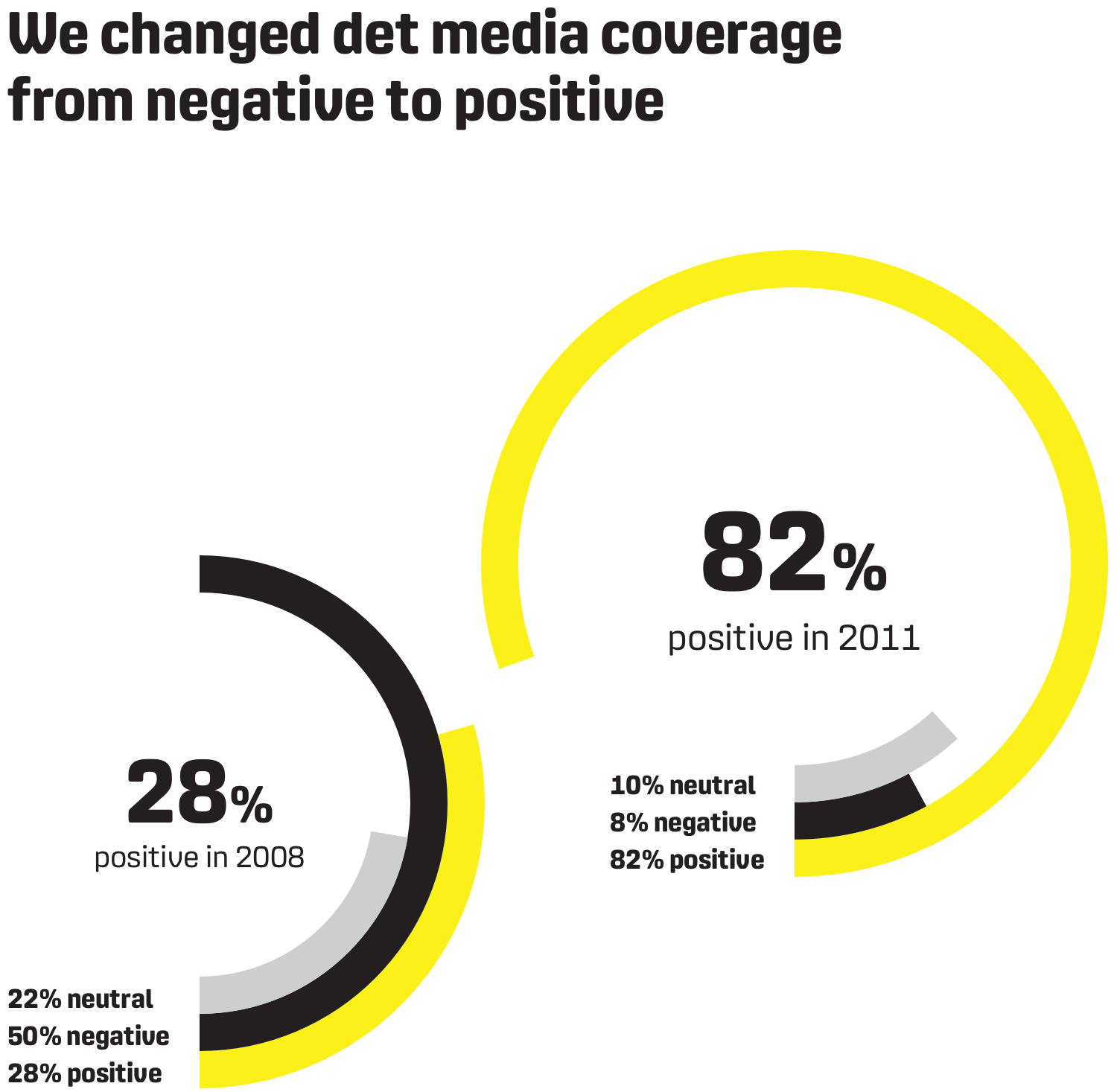 We got 546 positive stories about the bus drivers in the press during four years. This was vital to changing the bus industry's public reputation. By changing the image and perception of bus drivers we removed an obstacle that was preventing people from taking the bus.

Watch highlights from the PR strategy and results

Now the politicians are willing to join us in celebrating the bus drivers. Busses used to be unpopular but that has changed. We feel that and our drivers feel it. And it makes everyone want to do a bit more. That is absolutely the strength of Stagis. Paul Lacoppidan
CEO, Nobina Denmark 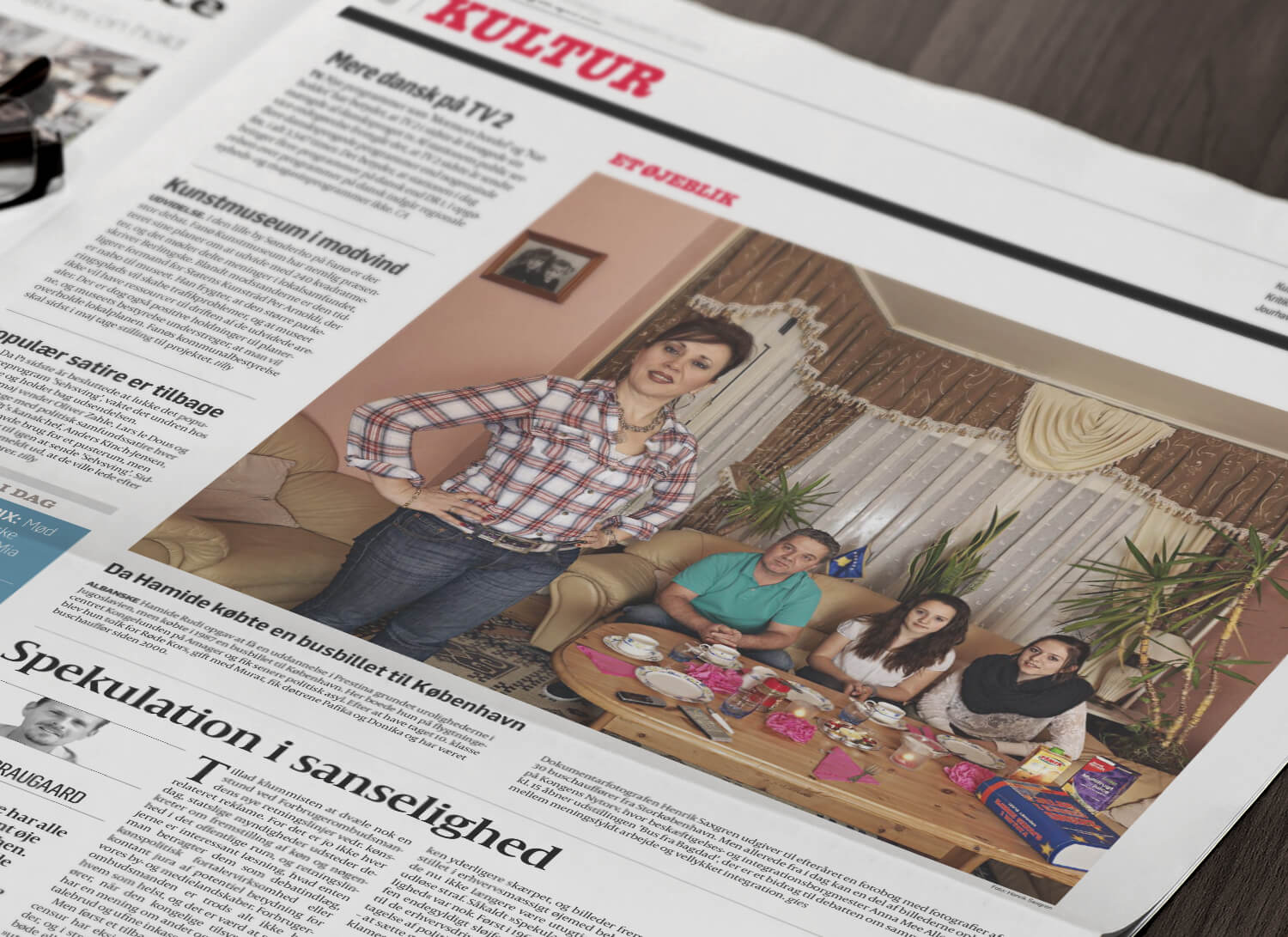 Would you like to know more about managing cultural changes and strengthening your brand? Meet us for a cup of coffee and we will give you our honest opinion on the possibilities for positioning your brand and business. Give us a call or write an email to Nikolaj Stagis. We can help you manage cultural changes or develop a digital strategy that attracts customers.