Back to our work

The Danish Ministry of Culture was present at the famous ‘Frankfurt Book Fair’ in order to strengthen new Danish children’s literature internationally. We developed an exhibition stand that combined a fairytale universe with a new children’s website, and an event with the German Nobel Prize winner Günter Grass. The stand was visited by more than 200,000 people and generated long-lasting value for the Ministry of Culture in both national and international media.

To support the newest drive of Danish literature, we developed a strategy that was based on ‘fairytales’. The theme established a link between Danish and German literature, and functioned as the common idea for the different elements on the exhibition stand.

To ensure an effective execution of the fairytale strategy, we designed the elements for the stand in accordance with the fairytale theme.

The Tree of Books

As the masterpiece of the stand, we designed and produced a five meter tall tree made of books. Over 2,500 antique books were used to build the tree, which resembled an old majestic tree from the fairytales. The tree was placed in the center of the stand to unite the different elements and functioned as a point of orientation at the fair.

The tree was both a symbol of fairytales and a way to display new Danish children’s books as the fruit of previous literature. Nikolaj Stagis
CEO & Founder, Stagis A/S

Bringing the universe to life

We developed an interactive corner on the stand that brought the children’s website to life and allowed visitors to enter the mysterious world of Danish storytelling. The walls were decorated with big-scale graphics from the children's website and we produced creative furniture to match the fairytale theme, including a bookshelf made of drawers and boxes and an old-fashioned school desk.

The Ministry of Culture’s presence culminated with an event with the German Nobel Prize winner, Günter Grass who had recently published illustrations of Hans Christian Andersen's fairytales. At the event, he did a reading of Hans Christian Andersen’s fairytales and gave his personal view on Danish literature. His presence endorsed the exhibition stand and created a valuable link between Danish literature and the German audience. As a result, more visitors than there was room for were attracted to the stand. 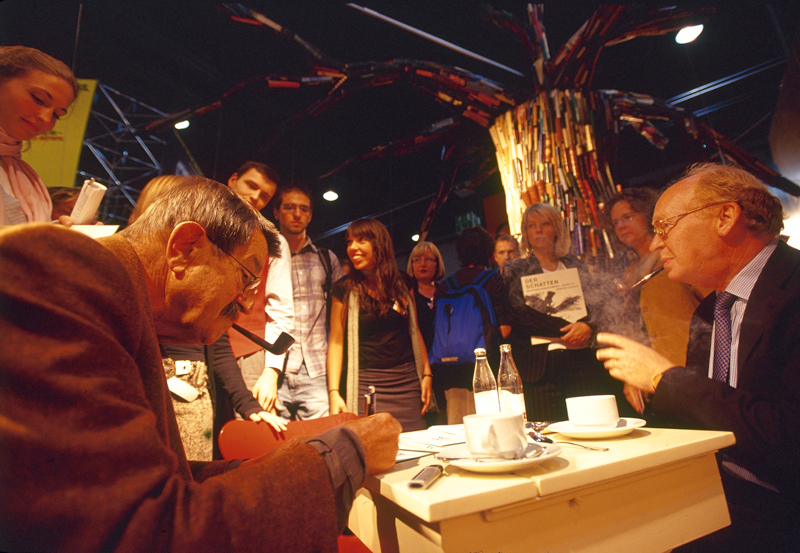 As the event with Günter Grass was a one-time event, we produced a documentary with the world famous author and showed extracts on the stand to make sure that the visitors could experience his precense during the five-day book fair.

The documentary was shot in Günter Grass' summerhouse in the 'Troll forest' on Møn, where he wrote most of his work and drew the illustrations of Hans Christian Andersen’s fairytales. Nikolaj Stagis directed the documentary while Niels Barfoed interviewed Grass about the relationship between German and Danish literature. Some of the scenes were shot in the forest behind Günter Grass’ summerhouse to draw parallels to the fairytale universe.

The fairytale exhibition stand became one of the most visited stands on the fair, and generated a considerable amount of attention to Danish children’s literature from both national and international press. The documentary with Günter Grass created value beyond the fair, as the documentary was later shown at international literature festivals all over the world, among others at Odense Film Festival. Also, the Danish television program DR2 Deadline brought a news piece on the documentary, Günter Grass’ illustrations, and his relation to Hans Christian Andersen’s fairytales.

Both the fairytale exhibition stand and the press coverage of it, strengthened the brand of the Danish children's literature - nationally and internationally.

Would you like to know more about building a digital business? Meet us for a cup of coffee and we will give you our honest opinion on the possibilities for strengthening your brand and business. Give us a call or write an email to Nikolaj Stagis. We can help you transform your brand digitally or communicate your strengths to attract customers.